The good thing about having a mom join a global church, is that there are people all over the world who will do just about anything for its members, even ones they’ve never met before. I had planned on winging this trip but my mother made a call to her friend Muhyuk, who stayed with her while visiting in the States. His family was happy to return the favor and give me a place to stay. I was grateful but wary from experience that my minivacation would be overrun with strange and daunting church duties and possibly not getting to see a single sight at all.

Having stayed in many Korean homes before, I also prepared myself for having every plan changed and every decision made for me. It doesn’t matter if your 15, 25 or 35…in Korea, if you’re someone’s kid, you’re going to be treated like one, probably even told to go brush your teeth at night and to put your shoes on when it’s time to leave the house. But it is unheard of to get time off at my school, especially in the first six months, so I knew I was very lucky when I got three days off during testing week. While plans for Hong Kong and Japan have been put on hold, I got to spend five beautiful days in the sun on Korea’s paradise island, Jeju. 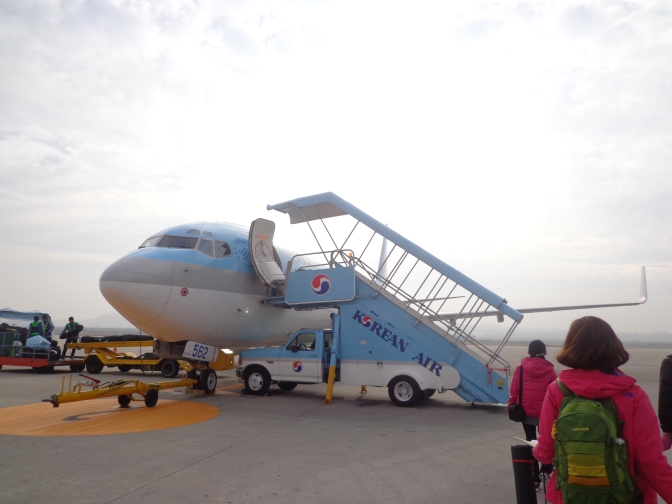 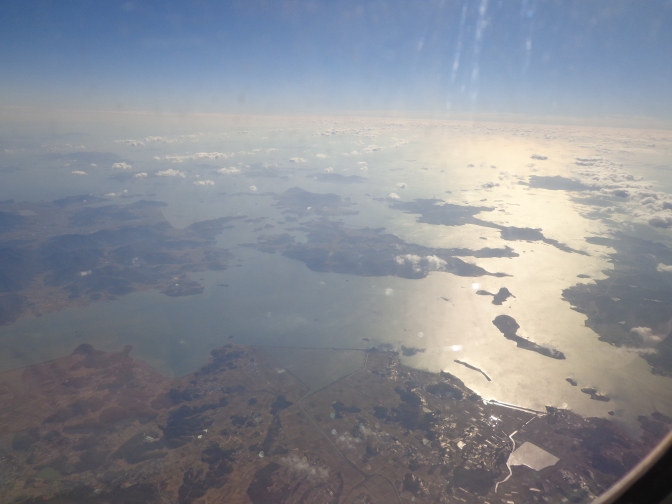 Goodbye Peninsula, I’m for the Island! 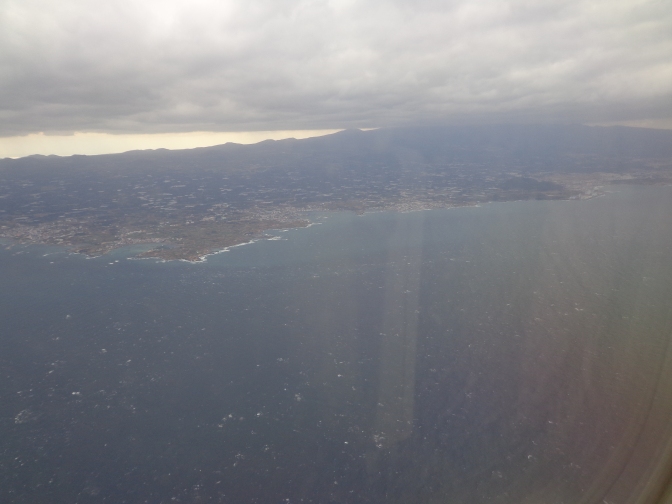 Muhyuk met me at the airport and the first thing he sorted out for me was a car. I met his father who shook my hand, told me to call him Samchon (uncle) and tossed me his keys. Which were a credit card shape remote and mine for the duration of the trip. Who does that?! In minutes I was on the road following Muhyuk around a volcano. I missed driving. I never thought I’d be cruising along the coast of an island in Korea. I soaked up every bit of sunshine I could on that joyride. 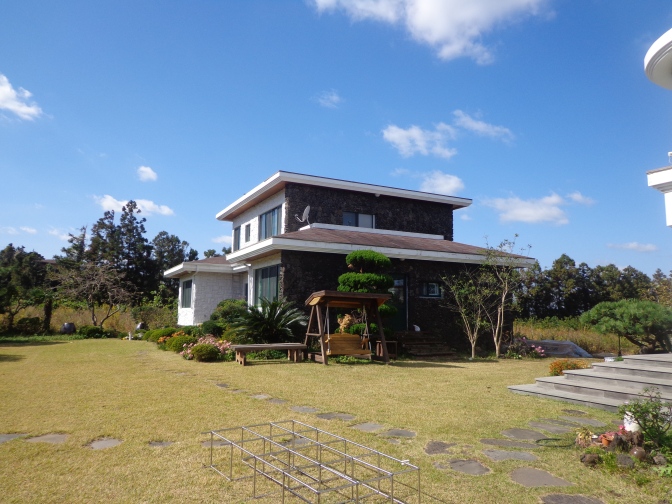 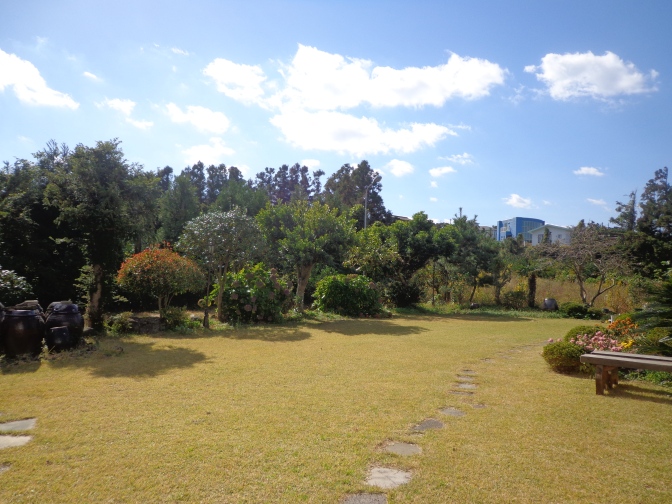 I couldn’t get over how sunny and colorful it was for November. It reminded me so much of Oahu. I met Imo (“mother’s sister”) and Muhyuk’s fiancee, Yunju and had a typical Korean lunch of rice, kimchi, fried mackerel, spicy anchovies, seaweed, lettuce and a potato soup.

After lunch everyone took a long nap. Yunju woke me up before dark and we headed to the gym.

For dinner Muhyuk and Yunju took me down Black Pig Street “Heuk Doeji Gil” for some of Jeju’s famous black pig BBQ. 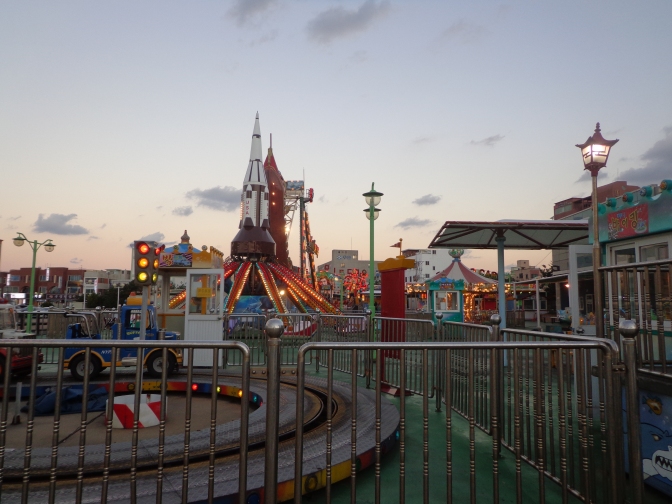 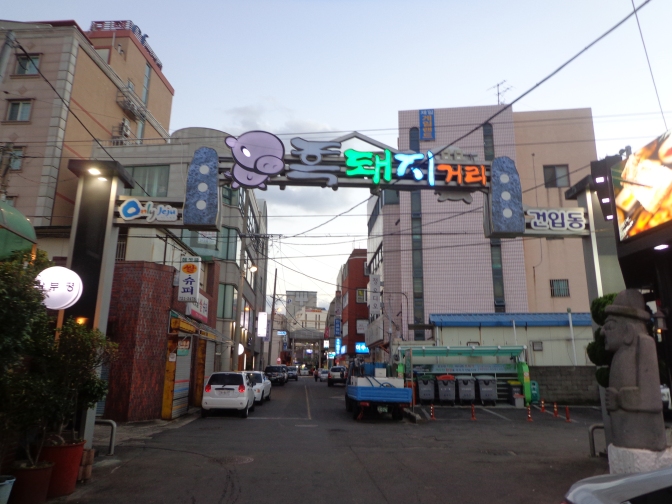 Even though I’m not a big pork fan, I love eating this way off the grill. I am really going to miss this when I leave Korea. When we finished devouring slab after slab of meat, I forgot when Korean’s go out they stay out, and while I was doing the whole stretch-before-turning-in yawn, Muhyuk asked if I’d like to go see the new James Bond movie next. Which of course I did. I love going to the show anyway but the experience is more of an event for me in Korea. Popular films are in in English and for 90 minutes I feel like I’m back home again. Also Koreans know how to do concessions. I put away a giant bucket of carmel popcorn. 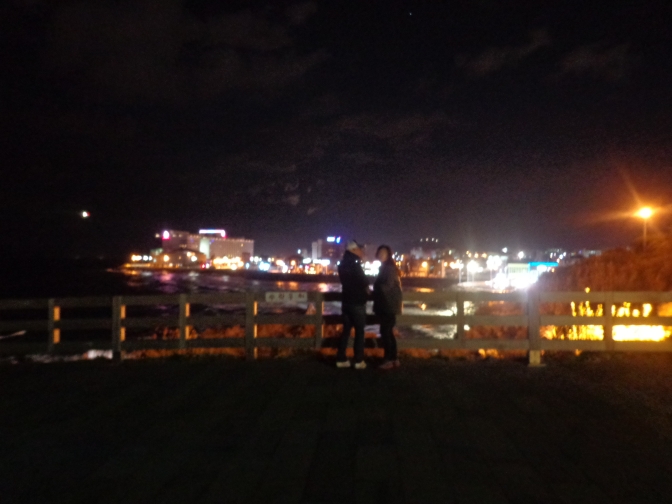 On the way home, Muhyuk swung by Yongduam, Dragon Head Rock on the northern coast of Jeju City. It usually annoys me, not knowing where I’m being taken every time I get in a car, but Muhyuk and Yunju were cool, so I trusted these Koreans wouldn’t be dropping me off at cult camp any time soon.

I don’t see the dragon, do you? It was so windy I couldn’t hold my camera still long enough to snap the pictures. Jeju wasn’t too cold, but the first three days, the gusts were so strong you couldn’t hear each other yelling through the wind. 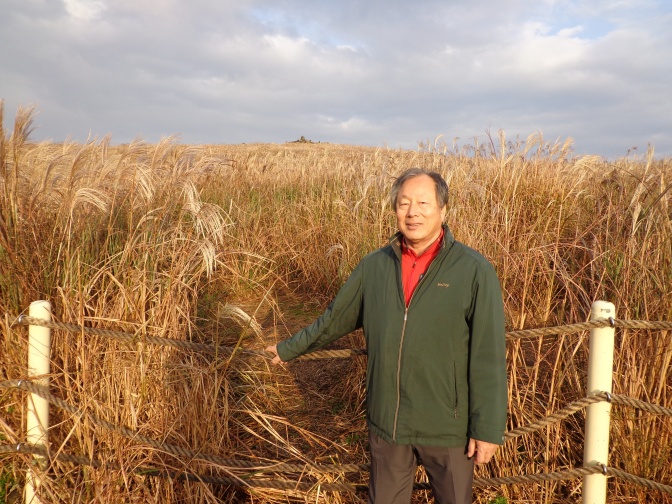 He is in the metal-crushing business.

He used to be in the opera-singing business.

This is Imo. She is in the raising-awesome-kids business. One of her daughters is an artist and a teacher, the other is a pastry chef in Paris and Muhyuk, my trilingual tour guide extraordinaire is, well I’m not sure what he does, but he is trilingual. 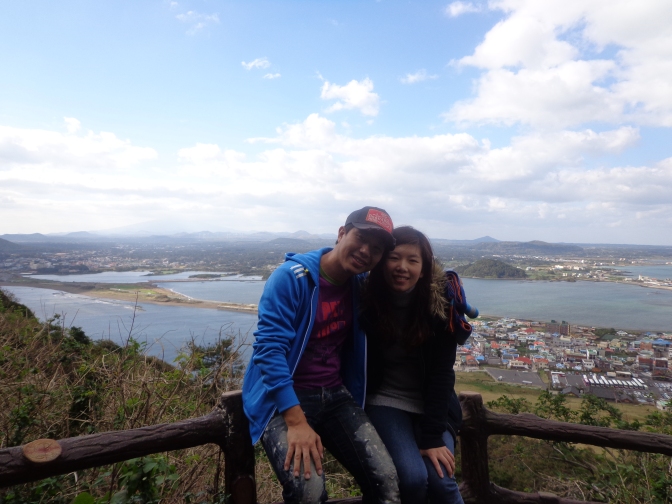