After reading a ton of blogs that talked about how chaotic races in Korea were, I wasn’t sure what to expect when I signed up for the International Gyeongju Marathon. I had heard that there are no corrals for faster/slower runners, no water stations, and that people running with strollers and dogs would slow you down if not run you down, for miles. I didn’t plan on setting any personal records, but that’s just what I ended up doing!

After getting a quesadilla with real guacamole from real avocados in Osan, I took a four hour bus ride south to Gyeongju, the city of a 1,700 year old buddha and stunning mountaintop views. I met up with a group of Brits I had signed up to run the race with at a minbak. Minbaks are like bare bones hotels. They’re nothing special, just an open room with mats, pillows and blankets to sleep on. But you don’t stay there for a chocolate on your pillow, you stay there because they’re really really cheap and near to whatever it is you’ve made the trip to see. 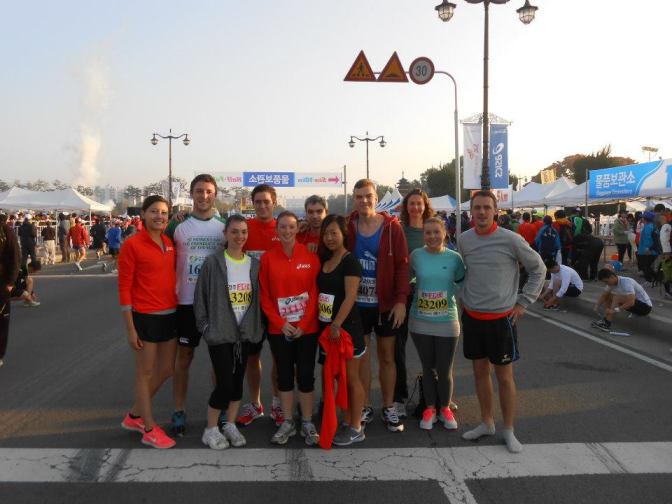 A restless nights sleep on the floor in a room full of strangers later, my usual race-day jitters still hadn’t shown up. The ones that come over me somewhere between the parking lot and the start line, with everyone sizing each other up as they stretch. I don’t know if it was because I’d never seen a Korean run unless they were waving down a missed bus or that several of them were smoking even just before the gun went off, but I wasn’t taking the competition seriously. I hadn’t trained either, so I had it in my head that this didn’t count.

But then I got it in my head that I at least needed to be the fastest girl in the group (I wasn’t). 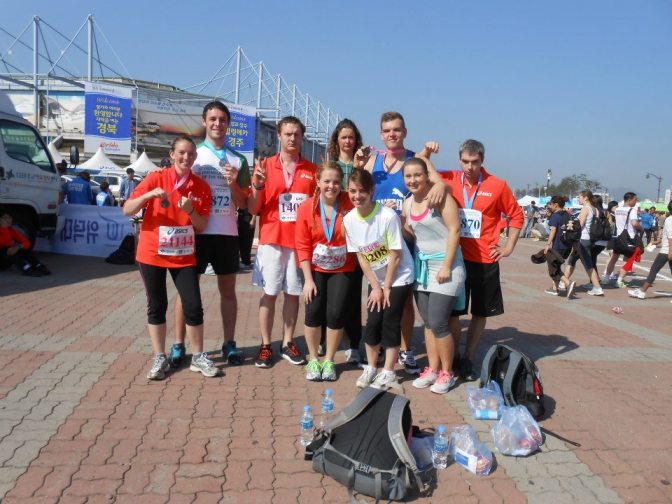 Usually when I PR it’s because a man in a banana suit is ahead of me on the last mile and have to beat that guy. But this race, I really pushed myself. The weather was perfect, the course was flat and the community did a great job coming out to support the runners. There were tons of volunteers and even traditional Korean musicians and dancers performing on the sidelines. There was water and Powerade as well as a water sponge (I still don’t know how to use that one) station. I didn’t trust my GPS at first, but I ended up shaving off not one or two but nine minutes from my expected time! Nine minutes! Proof that mentality is just as important as physical preparedness (I certainly wasn’t prepared). That or there’s something in the water sponges…